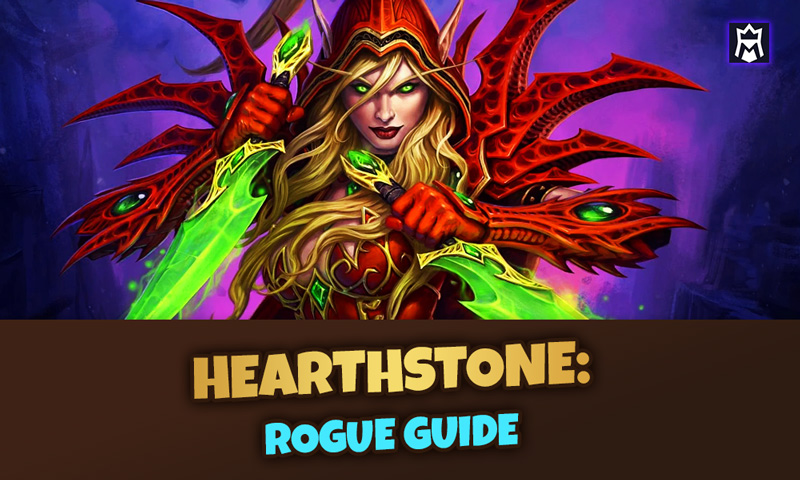 This beginner’s Hearthstone Rogue guide will teach you the basics of how to play the Rogue class in Hearthstone.

Rogue is a very powerful class in Hearthstone and it is one that can be played in many different ways depending on the deck that you choose.

In this article, we are going to go over some of the most popular rogue decks and what makes them so strong.

We will also go over some of the cards that make each deck unique so you can pick out which ones appeal most to your play style.

If you are looking for more help, then we have an entire section dedicated to helping new players learn how to play as rogues better than anyone else!

Introduction to Rogue Class in Hearthstone

In Hearthstone, the Rogue class is represented by Valeera Sanguinar

This article offers an introduction to the Rogue class, including tips and pointers for beginners.

In this Hearthstone Rogue Guide, we’re only talking about a couple of strategies. There are of course many ways to play the Rogue Hero, so it’s worth trying out a few different strategies and tactics until you find the one that suits your play style.

One of the strong suits of the rogue class is board control. The rogue has several abilities that allow you to return minions to the owner’s hands (Sap), eliminate minions (Assassinate, Backstab), or potentially clear the board of all minions using abilities such as Fan of Knives, or Vanish.

In addition to board control, the rogue deck consists of many combo cards you can play, which increase the benefit of a card (such as the damage) once another card is played.

These combos can allow the rogue to dish out some serious damage to the opponent’s most valuable cards, leaving them in a defenseless position.

The rogue’s Hero Ability, Dagger Mastery, allows you to equip a 1/2 dagger, allowing the rogue to destroy low-health minions without the need of a weapon card.

One strategy, especially in areas such as the Arena, is to trade your health early in the game to kill opponent minions and establish control of the board.

Playing the Rogue class allows you to choose between multiple play styles.  With the combo cards, rogues can do a lot of damage quickly.

Combining combo with the hero power can offer surprising burst damage.   The rogue can also utilize cards that buff their weapon for nasty attacks – such as Assassin’s blade and Deadly poison.

Here are three examples of popular Rogue Decks that you can try for yourself:

Miracle Rogue is a deck that’s been around for years, and it’s been a mainstay of the game since the beginning.

It relies on cheap spells to control the board and gain tempo and then finishes off opponents with a big burst from cards like Leeroy Jenkins or historically: Cold Blood.

The deck has lost some popularity as Hearthstone has evolved, but it’s seen a resurgence again after the latest game patches. So it’s still viable in this Hearthstone meta.

Quest Rogue is a deck that has been around for quite some time. It uses cards like Shadowstep and Youthful Brewmaster to replay the Quest, which will then deal four damage to all enemies. It’s a very powerful card that can win games on its own if left unchecked.

Some examples of cards used in the Quest Rogue include:

Tempo Rogue is an aggressive deck that aims to control the board early with efficient minions and finish off opponents with deadly combos. The deck utilizes Rogue’s ability to generate card advantage through cheap spells and efficient trading.

This deck is great when you’re just starting out, as it’s inexpensive, easy to learn, and has a lot of room for improvement.

If you’re looking for a cheap deck that’s still competitive, this might be the one for you.

The following is a list of popular cards for the Tempo Rogue playstyle:

Countering a Rogue in Hearthstone

Because the rogue’s hero ability utilizes a weapon, which they can buff. You should stock up on cards such as Acidic Swamp Ooze or Harrison Jones. This will help you present the high damage output from a buffed Dagger Mastery.

Because rogues are great at single target removal, utilizing buffs such as Divine Shield, and Taunts can help prevent the rogue from attacking you in the face directly.

Always remember the rogue may be stashing a board clearing card or holding on to an Assassinate.

You can attempt to bait the use of these cards by playing your second or third strongest minions until you feel safe enough to plop down your stronger minions.

Using several small minions rather than larger ones help to counter the rogues single target removal, and ensure that you don’t waste valuable mana gems on cards which will be destroyed in a single round.

Well, that’s about it for our guide to playing the Rogue class in Hearthstone. We hope you enjoyed reading it and learned something new!

Overall, there are many ways you can go about playing Rogue, and no decklist will be perfect.

If you play long enough and use Rogue to its full potential, you’ll find that over time you can specialize in certain things. You’ll find the deck or style of play that best suits you.

But as a starter guide for anyone unfamiliar with rogue or anyone who just wants a general baseline of all the possible options, hopefully, this will help get you started on your way to creating your own perfect Rogue deck!

Looking for a guide for a different Hearthstone class? Check them out:

Did you find our Hearthstone Rogue Guide useful? You can rate it below!