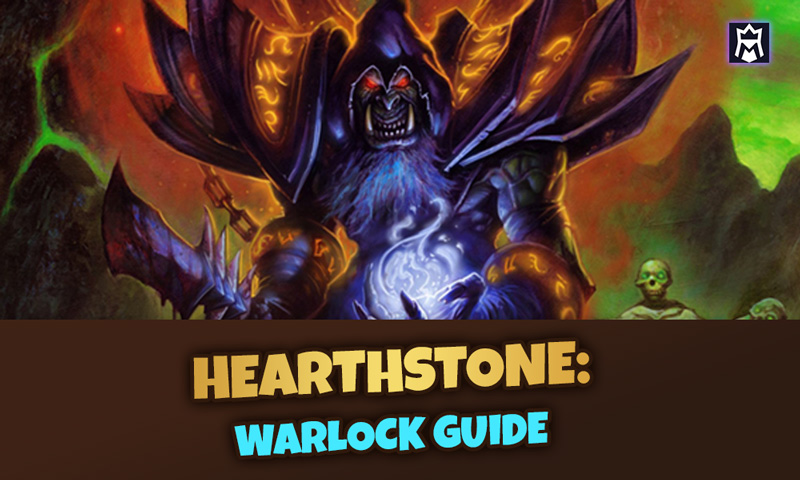 Wondering if you should play as a Warlock? Our Hearthstone Warlock guide about the benefits and drawbacks of Warlocks will give you all the extra information you need in order to make your decision easier.

Not only that, but you will also learn how to counter Warlock in Hearthstone when you encounter them on the battlefield.

The hearthstone Warlock class is represented by Gul’dan.

This article provides some general information about the Warlock class, including common play styles and techniques.

Keep in mind that the information presented here is of course not the only way to play the Warlock Hero class, and you should try out different play styles and strategies to see what suits you best.

In the true spirit of a Warlock, anyone playing this class must be willing to sacrifice anything and everything for the power to crush their foes on the battlefield.

Should You Play Warlock in Hearthstone?

The Warlock is a class for those who want to play the game on their own terms. They’re masters of minion abilities and spells but also have great board control.

The Warlock’s hero power makes them very good at applying early pressure by summoning an army of small minions onto the board.

This allows them to make trades with other creatures or push damage directly towards your opponent’s life total. You should use this opportunity to establish control over your opponent’s board by removing his minions with spells or your hero power.

This will prevent him from gaining any value from his minions while you build up more pressure on your side of the board.

Warlock’s Hero Power is Life Tap, which lets them gain two mana crystals each turn. This makes them an excellent choice for new players because they can use their Hero Power to get more cards and play more cards each turn.

Warlock is also good at controlling the board with cards like Possessed Lackey and Voidlord. If you control your opponent’s board, it will be difficult for them to deal damage to you or even win the game!

How to play Warlock

Warlocks have the ability to dish out a lot of damage in a short amount of time through the use of their minion cards.

Several cards, as well as the Warlock’s own hero ability help, serve to get as many minions out as possible at one time.

In addition to using cards, such as the summoning portal, Warlock’s special ability is Life Tap, which costs 2 mana crystals and removes 2 health from the hero.  Using this ability allows you to draw an extra card.

Due to the Hero ability, and other cards, such as Soulfire and Sacrificial pact, that work well with Warlock, many players newer to this class are initially turned off by the somewhat suicidal play style of the Warlock.

This self-damaging play style, combined with the fact that Warlocks are frequently a “late game” class may take some getting used to.

However, if played well, a Warlock is a formidable opponent on the battlefield with its ability to completely turn the balance of the game, or even to grab some unsuspected last-minute wins.

Even though Warlock is frequently seen dishing out massive damage late to mid-game, with the right card draws to get a rush-down deck, the Warlock can take control of the board and put pressure on its opponent immediately.

Many classes have AOE cards or board wiping abilities that can leave the Warlock in a vulnerable position, especially with heavy use of the Life Tap ability.

No Hearthstone Warlock guide would be complete without talking about how to effectively counter a Warlock on the battlefield. So let’s take a look at what are your options.

A highly offensive play style can be beneficial against a warlock, as the more frequently you are able to destroy the Warlock’s minions to prevent them from overwhelming you, or grab some damage to the Warlock – especially after Life Taps.

The key to winning a battle against a Warlock is to ensure your deck consists of some good board clearing cards as well as a combination of powerful minions – keep the cost in mind as you will need more powerful low-cost minions to get counteract the Warlock’s minions.

Silence cards will also work extremely well, especially after playing a card such as Summoning Portal.

Once you have the ability to get a Warlock to 15 hp or under, be extra cautious because the player may be holding on to Lord Jaraxxus, which can easily reset any damage that sends them below 15 hp.

Conclusion: Playing as Warlock in Hearthstone

In this article, we’ve covered what it takes to play Warlock in Hearthstone.

From the very basics of deck building and gameplay to advanced strategies and in-game tips, this Hearthstone Warlock guide will help you become an expert at playing Warlocks.

Warlock is an interesting deck, and it’s one that can be quite rewarding if you’re willing to learn all of its nuances.

You can’t just build a Warlock deck and expect it to work; it takes some practice to be able to use your hero power effectively and know when to use the right cards in different situations.

But once you get the hang of it, Warlock is a very rewarding class that can take down even the most difficult opponents!

And if you’re just getting started with Hearthstone, check out more of our Hearthstone guides:

Did you like our Hearthstone Warlock Guide? Rate it below!