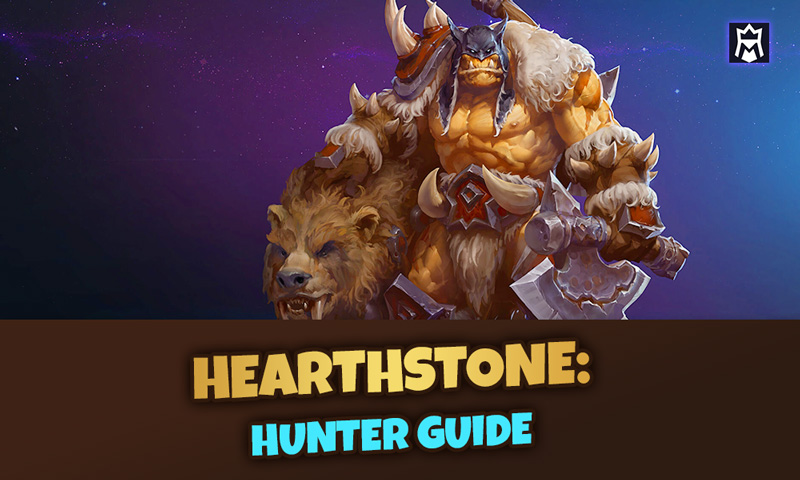 Hearthstone Hunter Guide: How To Play as Hunter & How To Counter Them

Do you know whether a Hunter deck is right for you? Our Hearthstone Hunter guide about the benefits and drawbacks of playing with this class will give you all the extra information needed.

You will also learn a few tips on how to counter Hunters when you go up against them in Hearthstone.

The hearthstone Hunter class is represented by Rexxar.

The Hunter comes equipped with the Hero Power Steady Shot, an ability that allows the hunter to deal 2 damage directly to the enemy hero.  This ability bypasses enemy minions as well as Taunt cards.

The Hunter deck consists of several beast cards, as well as spells, traps, and cards that buff other minions.  Left unchecked, the Hunter can quickly overwhelm the board with powerful minions.

The Hunter has access to many beasts that are capable of doing a good amount of damage to the opponent.

In addition, the Hunter will often lay down a buff that provides increased health and/or attack to all beasts on the board.  Other abilities the Hunter plays allow all beasts to have Charge.

Should You Play with a Hunter Deck?

Yes! If you’re looking to play with a Hunter Deck in Hearthstone, there are plenty of reasons to make it yours.

First, the Hunter class has some of the best weapons in the game. You can use these weapons as soon as you start playing—they’ll help you take down your enemies faster and more efficiently than other classes.

Second, Hunters can call upon their pets to do their dirty work for them. They have three different types of pets: beasts, spiders, and dragons.

Each one has its own unique ability and skill set that makes it useful for different situations. So whether you need a beast that can destroy enemy minions or a spider that can hide behind walls until it’s time to attack, there’s something for every situation!

Thirdly—and most importantly—Hunters have access to some of the most powerful spells in the game: Flare is one example of this (it lets you see invisible minions). These spells give Hunters an edge over other players who don’t know what they’re doing.

How to Play Hunter in Hearthstone

The common deck strategy of a Hunter is to quickly unleash a horde of minions, take advantage of buffs, and overwhelm the opponent. The Hunter deck allows the player to generate a lot of pressure through great card synergy and an aggressive play style.

While the Hunter has access to a variety of creature buffs, there are very few options that allow the hunter to buff Health. This means that low-tier creatures can hit hard, but also have a lower risk of survival, especially as the match continues.

The hunters’ access to traps can be a decisive factor in the outcome of a game.

If the player combines cards such as Snake Trap and Starving Buzzard – allowing three quick cards, then plays a card such as Unleash the Hounds or a minion that offers buffs to others – the Hunter will have a strong early advantage that will put massive pressure on the opponent.

The Hunter’s best chance of winning the game occurs early on before the opponent can establish a strong board.

We couldn’t end our Hearthstone Hunter guide without also giving you some tips on how to best counter opponent Hunter decks when you encounter them on the board.

There are a few different ways to counter the Hunter in Hearthstone.

First, you can use a deck that has a lot of healing and armor. This will help you stay alive longer so that you can eventually kill the other player.

It also means that if they have cards designed to kill a single minion, such as Explosive Trap or Freezing Trap, they won’t be able to use them effectively against your hero because it will take too long for them to take down all of your minions before they get killed themselves.

Another way to counter Hunter is by using a deck with lots of taunt minions (or taunt cards).

This will force the hunter’s minions into attacking these instead of your own hero, which means they’ll die very quickly and leave him vulnerable while he waits for more minions to come out of his deck.

The downside here is that these decks tend not to do very well against other types of decks (such as those with many spells or cards that deal damage directly), so it may be difficult for you if your opponent is playing one of those!

Also, the best counter-strategies to Hunter in Hearthstone come from your ability to predict your opponent’s movements and what type of deck they are playing.

Usually, the most common types of Hunter decks are Face and Midrange.

Face is a hyper-aggressive deck that focuses on playing your opponent down as quickly as possible.

The goal of this deck is to get in as many hits with your creatures as possible before they can draw into their taunts, heals, or board clears.

Because of this, Face Hunter is typically played by people who don’t want to take the time to learn how to play other classes — it’s an easy way to win games right away without having to spend a lot of time learning complex strategies or combos.

Midrange decks operate similarly, but they focus more on playing slower creatures and using those creatures’ abilities rather than playing lots of low-cost creatures at once.

This kind of deck takes a lot more practice than Face Hunter because it requires understanding how each card works individually to make them work together effectively as part of a larger strategy.

Conclusion: Playing as a Hunter in Hearthstone

Playing as a Hunter in Hearthstone is a lot of fun, and can be very rewarding. Hunters have access to some of the more powerful cards in the game and can harness them to great effect.

They are also able to adapt to any situation that comes at them, which makes them a great choice for players who like having options.

It’s important for hunters to stay aware of the board state at all times.

If you don’t know what your opponent is playing, you could fall behind very quickly and have no way of getting back into the game.

That’s why hunters need to keep their eyes open! Hopefully, our Hearthstone Hunter guide helped you get started in creating your first Hunter deck.

If you need more help with Hearthstone, check out these other guides we’ve written:

Did you enjoy our Hearthstone Hunter Guide? You can rate it below!