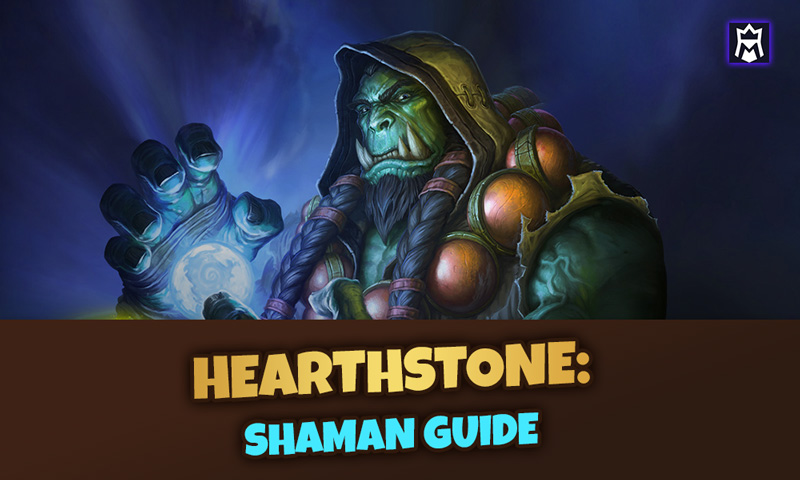 Hearthstone Shaman guide: How to use totems & counter them

Hey there, Hearthstone players! Are you looking for a Hearthstone Shaman guide? We’ve put together a quick and simple Shaman class guide to give you some ideas over what totems to use and also how to effectively counter a Shaman.

So let’s get started:

The hearthstone Shaman class is represented by Thrall

This article provides some general information about the Shaman class, including common play styles and techniques.

The information presented here is of course not the only way to play the Shaman Hero class, and you should try out different play styles and strategies to see what suits you best.

Why should you play Shaman?

Shaman is a class that will require you to play aggressively in order to be successful.

The Shaman class has some of the strongest early game cards in the game, which means that if you are able to get out of the early game with a lead, you should be able to snowball your opponent into defeat.

The Shaman class also has the ability to heal themselves and their minions, which can be useful for keeping your board alive for longer periods of time.

If you are able to keep your minions alive long enough, then it should be easy for them to overwhelm your opponent’s defenses.

The Shaman class also has access to powerful removal spells like Hex and Lightning Storm that can clear out an entire board if necessary.

These spells are especially useful if your opponent has played too many minions on one turn or if they have a large number of expensive legendaries in play at once (like Deathwing).

How to Play Shaman

The Shaman’s hero power, Totemic Call allows the Shaman to summon a random Totem.  Totems are summoned using the Hero power, and as such do not require the player to use a card in their deck.

The multiple types of Totems a Shaman has available can benefit the player in one of several ways.

Depending on your strategy, totems can be used for survival or for a more aggressive play style.

Totems are considered minions and can benefit from other cards the Shaman plays such as Bloodlust or Raid Leader.

These abilities can quickly turn a few (seemingly weak) totems into a game-winning board of powerful minions.

With Totems and cards that offer crowd control and removal of minions such as Lightning Storm and Hex, Shaman excel at field control.

The Murloc deck is a very popular strategy to use as a Shaman.

The ability to Summon totems can buff Murlocs as well as contribute to the field-swarming gameplay of Murloc cards.

The Shaman has a unique mechanic known as Overload.  This is an ability that reduces the amount of mana the Shaman can use on the next turn.

This will allow the Shaman to play powerful cards for a low mana cost, providing the Shaman with high burst damage.

Because of Totem Call, it is important to remember that Totems will be a continuous part of the game when playing against a shaman.

A method to counter this is to attempt to control the number of totems a Shaman has available on the board at all times.

A seemingly non-threatening totem can quickly turn into a card you wished you removed when you had the opportunity.

It is especially important to quickly remove cards such as Mana Tide Totem which allow an extra draw per turn – this can give the Shaman an enormous advantage if you do not rid the board of this totem as soon as possible.

Keep in mind that, because Totems do count as minions, abilities such as Bloodlust and Windfury can quickly win the game if the Shaman has a wide variety of minions on the field.

This is why it is of utmost importance to keep the number of minions and totems the Shaman has on the board to a minimum.

Keep in mind that the Shaman class has access to a card called Hex, which can turn your minion into a 0/1 frog with Taunt.

This can completely waste playing a valuable card – so it’s important to try and bait the Hex card by attempting to play threatening monsters before plopping down your strongest monsters and using buffs on them.

Remember a Shaman can only have 2 Hex per deck.

Due to the Lightning Storm ability, it is important to keep your field minimal until your opponent has played it.

This is important to keep in mind because cards like Lava Burst can also destroy your stronger cards.

Conclusion: Playing as a Shaman in Hearthstone

The shaman is not a complicated class to play initially, but it takes a lot of fine-tuning and experience to fully master.

The reward, however, is that the shaman is so versatile it can take on the role of either the aggressor or defender.

Having the finesse to use this versatility effectively in each match makes it one of the most rewarding classes to play in Hearthstone.

We hope that our Hearthstone Shaman guide was helpful to you in giving you some tips and pointers to get you started.

But again remember that there are a lot of ways to play Shaman class successfully so you can create your own strategy and deck for success.