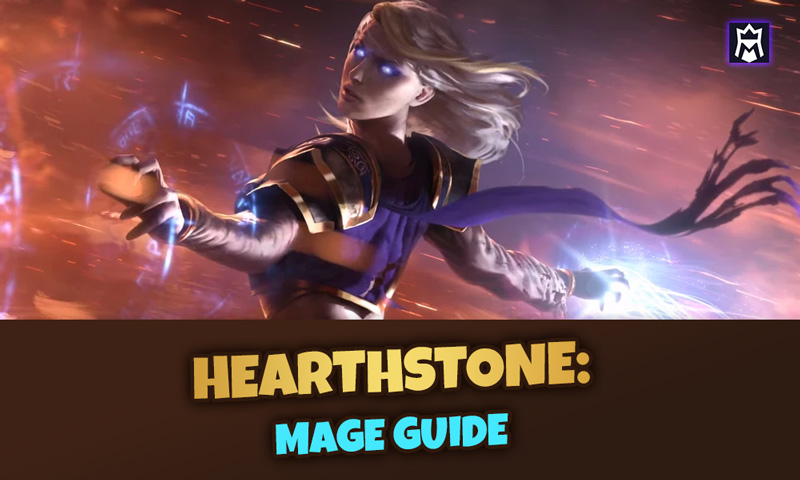 Hello, fellow mages! If you’re reading this, I’m going to assume that you’re a fan of magical powers and fireballs. Or maybe you just want to know how to play better with a mage deck. Either way, welcome to our Hearthstone Mage guide for beginners.

This article provides some general information about the Mage class, including common play styles and techniques and how to counter Mages on the battlefield.

Keep in mind though that this is more of a beginner oriented guide and so the info presented here is of course not the only way to play the Mage Hero class, and you should try out different play styles and strategies to see what suits you best.

With that out of the way, let’s start first with a quick introduction to the Mage class in Hearthstone.

In Hearthstone, the Mage class is represented by the legendary, Jaina Proudmoore.

Mages have the ability to easily disable a minion or damage the hero directly. In addition to their damage capabilities, Mages have great board clearing talents.

They are also known for their range of powerful spells which can be used to deal with any situation that arises during a match.

They also have access to some of the best RNG cards in the game, including Pyroblast, Fireball, and Flamestrike.

But Mages are perhaps most famous for their ability to control the board with their area-of-effect (AoE) damage spells such as Fireball and Polymorph.

Many players consider this one of the strongest aspects of playing Mage decks since it allows them to deal with large numbers of minions at once without losing too much health or being overwhelmed by enemy aggression.

Mage decks are also very effective at clearing out enemy threats before they can inflict too much damage on your hero’s health total.

This makes them ideal for newer players who want an easy way out against aggressive decks which rely on early-game pressure tactics like Zoo Warlock or Hunter builds which involve a high number of cheap minions and spells.

Should You Play with a Mage Deck?

The Mage deck generally contains minions that work to boost the spell power of the Mage, helping to strengthen the Mage’s numerous direct damage spells.

Neutral cards like Kobold Geomancer or Azure drake are excellent at increasing the damage of spells – a buffed and well-timed Flamestrike which can ordinarily be devastating on its own can wipe the board of numerous high-level minions in a single swipe.

Mages also benefit from cards that react to spell casts, such as Violet Teacher or Mana Addict.

Through boosting spell damage, gaining additional benefits from casting the damaging spells, and the ability to clear a board a Mage is a formidable opponent, but the damage is not their only strength.

With the appropriate cards on hand, Mages also have the ability to turtle quite well.

Mages come equipped with early game crowd control that can put them in a leading position within the first few rounds.

When the Mage predicts trouble, they have cards available such as Ice Barrier that can increase their risk of survival and have been known to completely turn a game around.

When playing against a Mage, there are a few tricks to keep in mind that will help you survive the onslaught of damage the Mage may unleash on your hero or minions:

Mages also have several powerful Secret cards that are likely to cause headaches for their opponents.  The effects of these cards can be minimized if you can predict what the Secret is.

Conclusion: Playing a Mage in Hearthstone

That’s about it for our basic Hearthstone Mage guide. The most important thing to remember is that playing a Mage in Hearthstone is both challenging and rewarding.

The deck has some strong cards, but it can be difficult to play. If you’ve never played a Mage before, we recommend starting out with a more basic deck and learning the basics of how to play the class before trying to master this one.

When you want to play a Mage in Hearthstone, you’re going to want to think about how you like to play.

Do you like the rush of playing fast and aggressive? Then go for the Mage deck that’s all about minions and attacking.

Or do you prefer a more controlling approach? Then try out a deck that relies on spells and direct damage.

Whatever your style, a Mage is one of the most versatile classes in Hearthstone, and it’s easy to find one that fits your needs!

In conclusion, playing a Mage in Hearthstone is an interesting experience. Mages have a lot of different cards and strategies they can use to win, which can be fun for players who like to experiment.

We hope that you enjoyed our Hearthstone Mage guide, even though it’s more aimed at beginners and we didn’t go super in-depth into more strategies.

Want to read even more Hearthstone guides? Check them out:

Was our Hearthstone Mage Guide helpful? Don’t forget to rate it below!