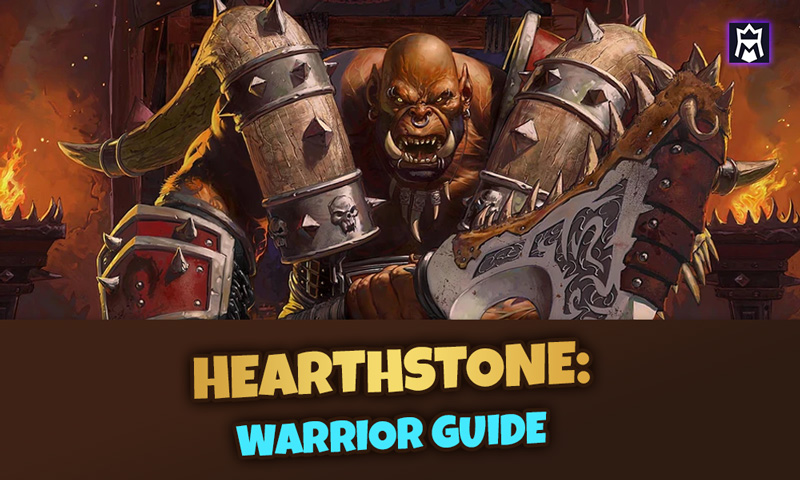 Welcome to Hearthstone Warrior Guide, a guide for new players who want to learn how to play the warrior class in Hearthstone.

This guide is written for new players, so it will explain basic strategies and best practices for playing a warrior deck in general.

You’ll find additional resources at the end of this article if you’d like more details on specific cards or advanced strategies.

The Hearthstone Warrior class is represented by Garrosh Hellscream.

This article provides some general information about the Warrior class, including common play styles and techniques.

The information presented here is of course not the only way to play the Warrior Hero class, and you should try out different play styles and strategies to see what suits you best.

The Warrior is primarily focused on dealing damage. Warrior decks should focus on boosting the attack of minions at the cost of the minion’s health with cards like Inner Rage and the Cruel Taskmaster.

These cards provide great synergy with Charge cards and cards that generate a beneficial effect when your minions take damage such as the Frothing Berserker and the Armorsmith.

An additional synergy for damaged minions can be utilized to draw extra cards with Slam and Battle Rage.

The Warrior Hero Power is Armor Up! For two mana crystals, you can provide your warrior with a permanent two armor buff that stacks.

It’s a pretty useful skill that provides what essentially amounts to a self-heal.

Some great neutral minions that go along with Warrior Cards are:

This is a simple one: taunt minions protect other minions from attack.

You can use them to protect your hero and as a distraction, or you can use them as bait for your opponent, hoping they will waste all their power attacking your taunt minion.

Charge minions are a little more complex, but they’re also one of the most important concepts in Hearthstone.

Charge means that these creatures can attack the same turn they are played (meaning you don’t have to wait until the next turn).

The trade-off here is that charge minions typically have weak stats for their mana cost — so if you want to play them early in the game and make an impact on your opponent, there’s a good chance you’ll be sacrificing some amount of damage later on when playing other cards with higher stats.

The warrior is a great class to play if you’re new to Hearthstone, or if you’re looking for something that can compete in all types of matches. But you will want to play and practice a lot of warrior decks in order to become a great player and have a high win rate.

The warrior’s versatility allows it to be used by both beginners and veterans alike. In addition, some of the most popular decks in Hearthstone are based around warriors (sometimes called “Warrior Control”), so mastering this class will open up more options for you later on.

We hope that our brief Hearthstone Warrior guide has been helpful for you, and if you have any questions or comments, feel free to leave them below!

Did you find our short Hearthstone Warrior Guide useful? You can rate it below!