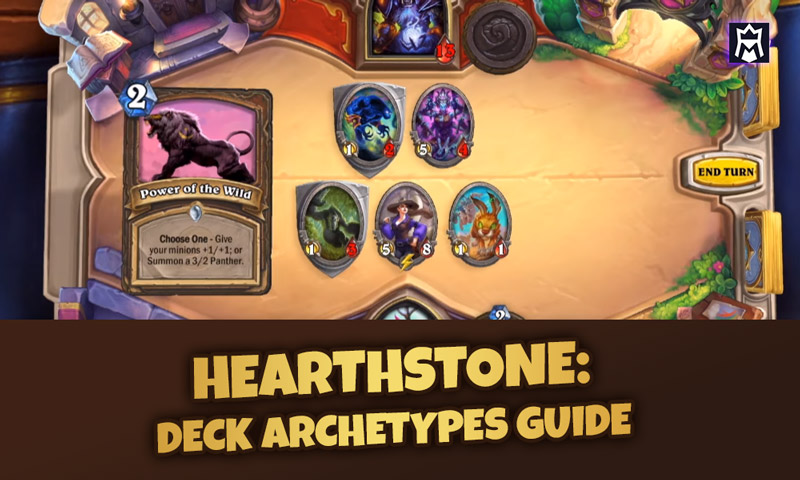 Hey there player, looking for a guide that covers all the popular Hearthstone Deck Archetypes? Look no further then because that’s exactly what you’re going to see on this page.

When building decks, there are a considerable number of combinations players can make to create unique decks.  However, it is best to have a Hearthstone deck strategy in mind rather than throwing cards into a deck without regard to synergy or purpose.

Deck types have been popular in CCGs for a long time.  Hearthstone deck archetypes classify decks based on their play style and strategy.

Over the years, numerous types of decks have been identified, some are similar to one another with subtle differences, and some are known by multiple names.  I try to include the most commonly referenced deck types below.

You do not have to choose a specific type of Hearthstone deck strategy, but generally, a deck you build will follow one of the below deck types.   Note that classifying decks into types is really just a simplification of the overall purpose.

Hearthstone decks will vary even when they follow the same type.  I will explain the strategy of each deck, as well as highlight some of the deck’s strengths and weaknesses.

You will most commonly hear or see Aggro Decks, Control Decks, and Combo decks.  I have also included other Hearthstone deck types which I occasionally see referenced.

Hearthstone Aggro decks are utilized by players who want to win quickly through high damage output.  A popular reason for players to use these decks is to win as many games as possible, as quickly as they can.

Because you win 10 gold every 3 wins, the more quickly you get from game to game helps you earn gold faster.

A strength of this deck is its ability to put a lot of pressure on the opponent, early in the game, by generating multiple threats.  This forces your opponent to respond quickly, or become overwhelmed.

By maximizing speed you are also dictating the pace of the game, which is known as Tempo.

The cards in burn decks generally consist of low-cost spells as well as creatures that can output high amounts of damage before they are destroyed.  It’s also a good idea to focus on mana acceleration or card cost reduction.  Mana acceleration cards are cards that grant extra mana through effects or spells, such as Wild Growth or Innervate for Druids.

Card cost reduction reduces the mana cost of a card through effects or spells such as the pint sized summoner or Summoning Portal.  This allows you to get cards on the board at a quicker rate.

Due to this early game pressure, you want to ensure that your mana curve remains in the lower range – with a heavy emphasis on low-cost cards.

This Hearthstone deck type is susceptible to having abilities countered, and may have a difficult time winning against players who are holding a creature-heavy deck.

To avoid falling to creature-heavy decks, it’s extremely important to maintain control of the field early on.

Additionally, the burn deck’s early game strength turns into weakness as the game moves into later rounds.   The idea of this Hearthstone deck is not allowing your opponent to get to a point where they can start laying down their higher damage/higher health creatures.

You will sometimes see the Control deck referenced as the Troll deck.  As the name implies, this deck is based around controlling the board and completely frustrating your opponent.

Hearthstone Control Decks have a great ability to counter (or even redirect) that high damage card or ability you have been waiting for the perfect moment to use.

They also have a habit of nerfing that creature you have been saving up your mana for, down to a 1/1 or stealing the card from you completely.  The primary strength of this deck is its ability to gain value through devaluing your opponent’s cards.

This Hearthstone deck utilizes a number of cards which can provide card advantage.  Card advantage refers to holding more cards in your hand than the other player.

By having more cards in your hand, you have more options at your disposal to deal with your opponent’s threats or to deal damage.

Cards that help to generate card advantage include cards that allow you to draw additional cards.

For example, Sprint draws 4 cards at the cost of 1 which generates a 3 card advantage.  Additionally, cards that provide board presence and allow you to draw a card simply pay for themselves – these cards include Novice Engineer, Gnomish Inventor and Azure Drake.

You will also gain a card advantage through favorable card interaction.  By playing your cards strategically, you can use your minions or spells to neutralize or remove a greater number of your opponent’s cards.

One weakness of a Control deck is a Creature deck, which can quickly overwhelm a control deck if you have no cards to block the assault of early-game minions.

Turtle decks can also cause problems for a Control deck when the deck does not contain enough direct damage cards.

This Hearthstone deck is built around card synergies which will allow the deck owner to pull off surprising and powerful attacks.

A strength of the Hearthstone combo decks lies in the surprise factor of combinations you can quickly play, and the powerful damage those combinations are likely to do – however, its weakness lies in the fact that the deck requires certain cards to be in your hand before they can be played together to form the appropriate combo.

Due to this, it is extremely important to ensure you build your deck in a way that allows you to have consistent combos.

Hearthstone Turtle Decks are very similar in nature and purpose to control decks.  If you enjoy slowly taunting your opponent, then the Turtle deck may be for you.  Your chances of survival, and ultimately winning the game increase dramatically the longer the game continues.

The Hearthstone turtle deck is built around the concept of survivability and can generally withstand the damaging abilities and creatures that other deck types might throw at it.

As the game moves into later rounds, and you have a higher mana pool – the deck allows you to bring out the big guns, almost ensuring a victory.

While the Turtle deck favors the end-game, don’t make the mistake of putting too many high-cost cards in your deck for a high mana curve.

While you should have a few high-cost cards, you should still maintain a good supply of low-cost heals and mid-cost cards that can redirect damage.

The point of this type of Hearthstone deck is to increase survivability until the end game, where you can dish out large amounts of damage.

You should consider adding some good, low-cost counterspells early on as many of your initial moves will likely be reactionary.  Having cards on hand that will allow you to nullify a burn deck’s attempts to damage you is key to moving into later rounds.

Turtle decks are likely to run into situations where you have cards in your hand, but are unable to play any due to the high mana cost of the card.

Hearthstone creature decks are also known as swarm or minion decks.  These decks bear a very strong resemblance to the Aggro deck.

The point of this deck is to fill the board with as many minions as possible, in the shortest amount of time, and buff them to increase damage and possibly health.

Synergy is a large part of creating an effective creature deck.

You will find some types of cards designed to be played with similar cards.  This is where popular Hearthstone deck types, such as the Murloc deck, come from.

If you are playing against an opponent who drops a Murloc that adds damage and health to all other Murlocs, prepare yourself for the Murloc onslaught.

The focus of a creature deck is to overwhelm your opponent early in the game.  Due to this focus, creature decks generally consist of a large amount of smaller health and smaller damage creatures.

This is because these types of cards generally cost very little mana to play, allowing the player to quickly play multiple creature cards in a single round.

Creature decks will generally get a large number of low-cost creatures on the board, and then play a card that gives all creatures a  buff – making the opponent virtually unstoppable.

A weakness of a creature deck is any deck that focuses on AOE (or area of effect) abilities.  The right Hearthstone card can quickly wipe out your opponent’s entire army.

So there you have it, a quick guide explaining the various different Hearthstone Deck Archetypes that players use for their strategy to counter others.

Hopefully, our information was helpful to you and wins you more games. You can also read our basic Hearthstone guide if you want to learn even more.

Did you enjoy our Hearthstone Deck Archetypes Guide? Rate it below!