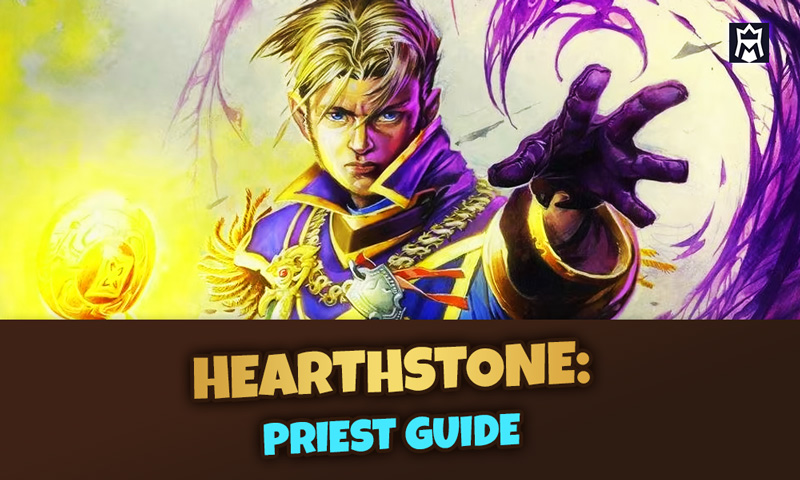 In this Hearthstone Priest guide, we’ll be going over some general tips and strategies for playing the Priest class in Blizzard’s popular card game.

We will also discuss what cards are best for new players and how to incorporate them into your overall strategy.

But not only that, at the end of this Hearthstone Priest guide you will also see a couple of examples of Priest Decks that you can try and play around with.

Introduction to Priest Class in Hearthstone

The hearthstone Priest class is represented by Anduin Wrynn.

This article offers some general tips on playing the Priest Hero class. However, keep in mind that these strategies are not definitive; you should try out different approaches to see what works best for you!

While Anduin roamed the Stormwind Keep as a boy, through most of his WoW existence, the Hearthstone Anduin wields a high-powered deck with lots of unexpected tricks to throw at his opponent.

Unlike other classes, the Priest can change their Hero power with a card draw, switching from a Lesser Heal to wielding Mind Spike with a Shadowform card.

If the priest draws a second Shadowform, the 2 damage Mind Spike is upped to three damage – which can cause some serious issues for the opponent.

The Mind Spike ability works much like Hunter’s Steady Shot but can ping Heroes as well as Minions.

With all this power, however, the Priest class is fairly vulnerable at the beginning of the game.

However, once you gain more cards and Mana crystals, the Priest’s true abilities shine. With their ability to heal both minions and themselves, and the card synergies they have available – the Priest can be a formidable opponent mid to late game.

The healing ability of the priest is reinforced with synergistic cards such as Inner Fire or Northshire Cleric.

Due to this synergy and healing – a good Priest player is capable of playing strong defense through keeping their minions alive and regenerating their defending line.

If these abilities weren’t interesting enough – just like WoW Priests of yore, the Hearthstone Priest can cause you some serious headaches with Mind Control, Mind Vision, and ThoughtSteal – allowing the Priest to take control of a character, or steal cards right from your deck.

Here are a couple of Priest Deck examples that you can try out and see which one suits your play style the best:

The main weakness of this deck is that it is weak against decks with large numbers of small taunt minions, so if you’re playing against a lot of aggro decks then you’ll probably want to switch out some cards from your list for more removal or taunt minions.

Here are some tips on playing a Reno Priest deck in Hearthstone:

Dragon Priest is one of the most popular decks in Hearthstone. It was built around dragons and their synergy with Dragon synergy cards, such as Blackwing Corruptor and Twilight Whelp.

This deck can be played at any level of play, but it excels at high ranks due to its ability to out-tempo opponents. If you’re looking for a budget deck that still packs some power, this is your best option!

This deck list will serve as a great starting point for both new players who want to try out this archetype and veterans who are looking for an update on their current version!

The Lyra the Sunshard deck is a control deck that aims to control the board with spells and minions. Your goal is to draw through your deck, take out your opponent’s minions, and then play Lyra to gain a card advantage over them.

You will often want to save your Northshire Cleric until after you have played Lyra so you can draw two cards instead of one. If you have a Shadow Ascendant in hand at any point, try not to play it unless it’ll help keep yourself alive or get extra damage on your opponent (if they’re low enough).

You should also be sure not to use Circle of Healing if you don’t need it – drawing more cards than normal is nice, but life loss is not worth it when playing this kind of deck!

When playing against aggro decks with this priest deck: focus on keeping the board clear as much as possible while keeping some sort of healing going (and possibly using Shadow Visions if necessary).

Well, that’s about it for our guide to playing the Priest class in Hearthstone. We hope you enjoyed reading it and learned something new!

If so, take a moment to leave us some feedback—we always love hearing other players’ perspectives on what works well or could be improved upon when learning any game.

The Priest class in Hearthstone is also known for their ability to deal with big threats such as the dragon or other powerful creatures quickly.

Check out even more Hearthstone guides for different classes:

Did you find our Hearthstone Priest Guide useful? You can rate it below!