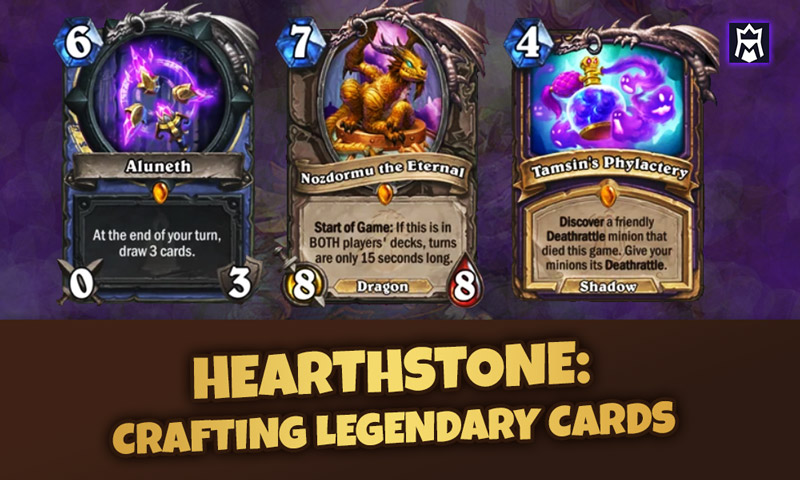 As players begin to earn more Arcane Dust from card disenchants, a common question becomes “which legendary card should I craft first?”

You may have noticed that legendary cards can cost upwards of 1600 arcane dust, which means you may have to save for a while before you can get your first Hearthstone legendary crafted card.

When you do – you want to make sure you are spending that dust on the wisest choice, right?

We suggest focusing on crafting a legendary card that will fit in a wide variety of decks and for a variety of classes.

From our experience disenchanting and creating cards, as well as from the research we’ve compiled, we recommend considering creating one of these 5 legendary cards first.

Ultimately, the card you choose depends heavily on your play style.  While we attempted to keep this broad – some cards may still be better for specific types of decks or with certain Hero Classes.

Your opinion may differ from below, and we recommend researching what cards may suit your play style the best before potentially wasting your dust on a card you end up rarely using.

Which Hearthstone Legendary Cards are Best to Craft First?

“He was sent by the Lich King to disrupt the Argent Tournament. We can pretty much mark that a failure.”

Flavor Text of the Black Night

The Black Knight is a great Hearthstone legendary card to craft and to have around, especially if you enjoy playing more aggressive decks.

His Battlecry destroys an enemy minion with Taunt, and since many players tend to put their best buffs on their good Taunt cards – especially later into the game, The Black Knight can be a game changer.

Pay attention to the types of players you run into before choosing the Black Knight – if you happen to run into a lot of players that utilize very few taunts – skip because the card will become too situational.

“Ysera rules the emerald dream. Which is some kind of green-mirror version of the real world, or something?”

A close second to The Black Knight is Ysera.  Ysera comes packed with a whopping 12 hp and will allow you to draw a special dream card at the end of your turn.

Ysera fits well into nearly every deck – the only problem with Ysera is sometimes you don’t get the most optimal dream cards for your situation, though all of them are pretty good.

Ysera gives you the immediate benefit of having a high hp minion on the board, and at the end of your turn gives you one of 5 dream cards.

The downside to Ysera is her 9 mana cost – so if you summon her, and she doesn’t grant you cards you can use, you may regret not using your mana on something else.

Even if your opponent throws a silence on Ysera – you still have the benefit of a 4/12 card.

“Ragnaros was summoned by the Dark Iron Dwarves, who were eventually enslaved by the Firelord.  Summoning Ragnaros often doesn’t work out the way you want it to.”

Many consider Ragnaros one of the best legendary cards in the game, and with good reason, though he isn’t at the top of the list because he can often attack minions you are least worried about.

If you do not yet own this card, this is an excellent addition, suitable for many decks and play styles.

Ragnaros can easily fit into just about any deck, and on top of that, can completely change the game.

As soon as you plop down Ragnaros he will do 8 damage immediately, so even if he becomes silenced – he has already hit your opponent for a good deal of damage.

Even if your opponent has been saving a silence, and throws a silence down – you still have a card with 8 attack and 8 hp.

Keep in mind this card deals 8 damage at the end of your turn – so if the opponent chooses to ignore this card – or simply cannot counter it, he will blast out an 8 damage again and again.

The one balancing factor of this card is that he cannot attack.

“Hogger is super powerful.  If you kill him, it’s because he let you.”

Hogger is a popular addition to many decks, and often a top choice among players.  Hogger comes with a good amount of attack and HP, but not great.

Still – he is able to hold his own and possibly require your opponent to sacrifice some cards to kill him – which they will want to do as soon as possible due to his mechanic.

At the end of your turn, Hogger will summon a 2/2 knoll with Taunt – which can be especially aggravating to your opponents.

This card also works really well with cards such as Knife Juggler, because every time a new Knoll is summoned, Knife Juggler will hit one of your enemy’s minions for 1 hp.

I definitely recommend playing both as soon as you can, after a nice Taunt.

“Sylvanas was turned into the Banshee Queen by Arthas, but he probably should have just killed her because it just pissed her off.”

Sylvanas Windrunner has a pretty affordable cost of 5 mana, with an awesome ability to take control of a random enemy minion upon death.

Granted, if your opponent has no good minions on the board when she dies, you don’t get the full benefit of Sylvanas, however, your opponent will most likely sacrifice many of their good minions to get rid of her – which is a win.

This is a big psychological card that can really mess with your opponents and add some pressure to their game.

Many people place Cairne at the top of their crafting to-do list.

Cairne not only has a good amount of attack and HP but includes a Deathrattle that will summon a new card (Baine Bloodhoof) with the same attack and HP.

This card has some enormous staying power on the field and can cause your opponent to sacrifice a lot of their minions getting rid of Carine and Baine.

Leeroy comes packed with both charge and a Battlecry which will summon 2 1/1 whelps.

However, the whelps are summoned for your opponent – not you. I like this card due to his high attack and his charge ability, but didn’t include it in the “must craft” list because his low HP means he will die really quickly – usually after that first charge.

He is really useful in eliminating some higher HP minions from the field in a pinch though, which is why he is a good card.

Nat Pagle is another popular choice when it comes to Hearthstone legendary crafting due to his decent health and his mechanic which provides you with a 50% chance of drawing a card at the end of your turn.

Unfortunately, his zero attack makes him an easy target for extra minions your opponent may have out at the end of their turn, so he can die pretty quickly if you don’t have some nice taunts out.

I personally dislike the RNG aspect of his card draw capabilities – it always seems like RNG doesn’t work in your favor when you really need it to.

At first glance, this card doesn’t look very special – especially for a legendary. The beauty of this card is his addition of +1 spell damage and his death rattle. When Thalnos dies, which he easily does, you can draw a card.

The on-demand extra spell power can be really great in some situations, and allow you to clear out multiple enemy cards in one go.

Bloodmage Thalnos is valuable because he can easily fit into any deck that can benefit from a boost to spell damage. Plus, drawing cards is a great way to win the game.

Some of these are complete game changers, and all of the cards are decent and should be considered when you are looking to legendary craft a new card.

These can’t be played in every deck of course, but if you tend to play one deck more than others, these may be a good choice.

Because your opinions may differ from ours, we would love to hear what cards you chose and why. This will also help out others reading this article.

Leave us a rating or a comment below and let us know what you think of our Hearthstone legendary crafting guide for your first cards.