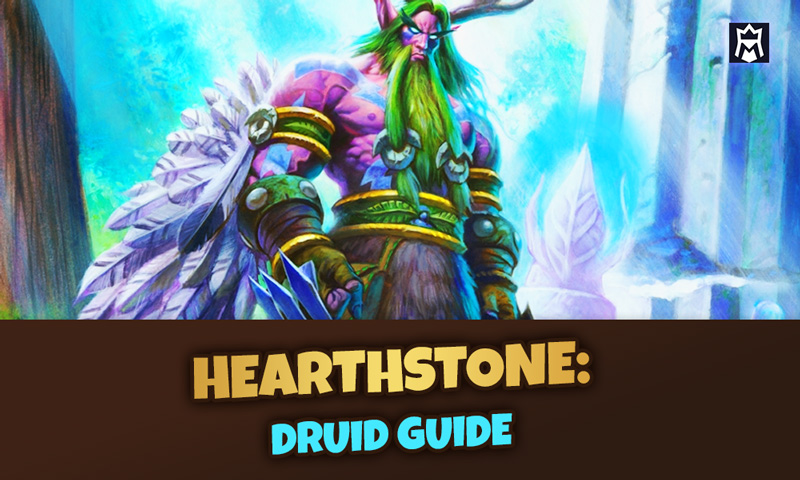 In this Hearthstone Druid guide, we’ll be going over some general tips and information you need to know about playing the Druid class in Hearthstone.

We’ll also talk about which cards are best for new players and how they fit into each class’ overall strategy.

Introduction to Druid Class in Hearthstone

The hearthstone Druid class is represented by Malfurion Stormrage.

This article provides some general information about how to play the Druid Hero class, including common strategies and techniques.

The particular skills described here are not necessarily a comprehensive list of all possible tactics for playing this hero, but they should provide you with an idea of what kind of things Druids can do!

As one would expect, the Druid is a very versatile class to play with. Druid decks are good at ramping up mana for quicker access to higher-cost cards.

The Druid card options include Innervate and Wild Growth.

Stacking your deck with double innervates allows you to get some high-cost cards out early in the game. One word of warning when throwing out a high-cost creature at the beginning of the game – be careful of Polymorphs, Executes, and potential Assassinations.

The Druid also has a good selection of abilities to choose from between dealing damage or drawing a card – two powers that can make a win. In addition, the Druid’s deck consists of many “Choose One” cards, which is an essential mechanic to the druid’s versatility and hybrid play style.

The Druid Hero Power is Shapeshift. By expending two mana, you gain access to a buff that provides you with +1 armor and +1 attack for the turn, until it is used up.The power is decent, but not great.

It will allow the player to take out some low-health minions early on, or use it to direct damage the opponent, provided the board is clear of taunts.

Because of the Druid’s Choose One mechanic, the Druid class has great top deck draws.

With the addition of Starfireand Wrath to the deck, the Druid will also have almost continual board control as the versatility of these cards can get you out of a tough situation quickly.

Neutral cards, such as Dalaran Mage and Azure Drake play great with the Druid deck and help to increase control of the board when combined with the right spells.

In this section, we’ll cover the basics of a couple of core Druid decks and how to play them. Here are some of the deck types that you’ll see pop up on the ladder:

Druid has access to some of the strongest minions in the game, which makes it a great class for beginners.

If you’re just starting out as a new Hearthstone player and want to try druid, then I would recommend getting used to playing with these cards first:

Druids have access to some pretty expensive cards but they also have some very strong ones too.

The Ancient Of War is one of the most expensive cards in Hearthstone at 7 Mana but it’s worth every penny because it gives your hero Taunt and +5 health or +5 attack.

Well, that’s about it for our brief and general Hearthstone Druid guide. We hope that it has been helpful for you, and as always if you have any feedback or questions you can leave them below.

Druid is a very strong class that has been a staple of the game since its inception. It has many tools to help you survive and deal with early pressure as well as strong late-game options that can turn the tide of any match.

The Druid Hero Power is also one of the best in Hearthstone, so use it whenever possible!

Check out even more Hearthstone guides for different classes:

Did you find our Hearthstone Druid Guide useful? You can rate it below!