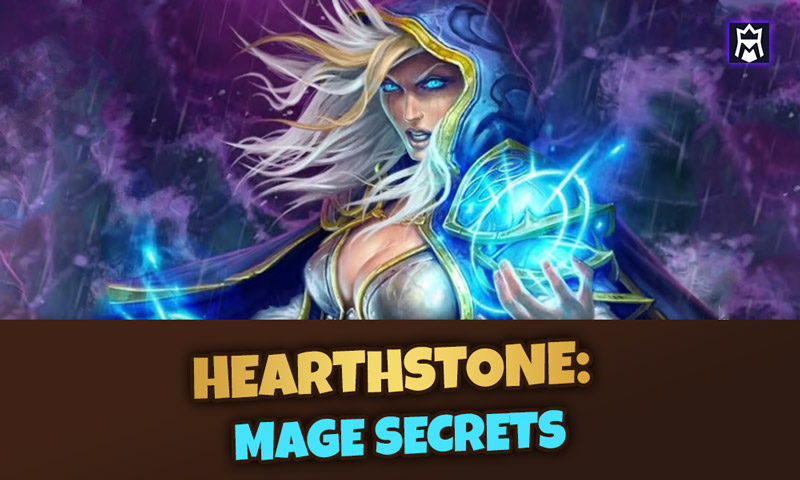 Do you enjoy playing Hearthstone as a mage? That’s awesome, we like it too, and because of that we have prepared this Hearthstone Mage Secrets guide.

Regardless of whether you are playing against a Mage or as one, it is important to learn the various ways Hearthstone Mage secrets can be countered.

If you are playing as a Mage, knowing your Secrets’ vulnerabilities may help you strategically use them to catch your opponent off guard.

But also if you are playing against a Mage, it is crucial to know how to recognize when your opponent has cast a Secret. Once you do, it is important to know the counters for each one to minimize their effect.

In this guide, we will first approach Hearthstone Mage secrets as though you are playing against a Mage who has just used a secret.

The last part of this article discusses the numerous ways in which Mages can use their secrets most effectively.

What are the Mage Secrets

Ice Barrier: As soon as your hero is attacked, gain 8 armor

Note that only physical attacks will trigger this secret so if the Mage takes damage through alternative means, such as a Hero Power or Battlecry, this will not be triggered. This makes it possible for the Mage to die while they have Ice Barrier activated.

However, once the secret has been triggered and the armor applied, the armor will serve to mitigate damage from all types of damage.

Mirror Entity: When your opponent plays a minion, summon a copy of it.

Note that this will only be triggered when your opponent plays a minion. This will not trigger if a minion is summoned through some other means.

A card’s Battlecry mechanic will not be copied when Mirror Entity is triggered.  A Battlecry will only trigger when a card is played from the hand, and cards created via Mirror Entity are considered cards that are summoned.

The exception to the above rule is with cards that have a Battlecry that affects the card itself. For example, Injured Blademaster will be copied in the damaged state of 4/3, and cards like Twilight Drake will still change health.

Since these two spells have very similar effects, I am listing them together.

Counterspell will be triggered when your opponent casts any type of spell.  This secret will then counter the spell cast.

What this means is that the actual effect of the spell will not occur but the opponent will waste resources in their attempt to cast the spell.  This does not apply to Hero Powers or Battlecries.

Spellbender is similar in that it is triggered when your opponent casts a spell – however, this will only be triggered when a spell is cast on a minion.

Also, when Spellbinder is triggered, rather than countering the spell – the secret summons a 1/3 minion which becomes the new target of the spell.

If both of these cards are up at the same time, and a spell is cast that would trigger either of these – Counterspell will take precedence.

Vaporize: When a minion attacks your hero, destroy it.

When the mage is attacked by a minion, this will trigger the effects of Vaporize which will then kill the minion.  Because this is only triggered when a minion attacks, the trigger does not apply to Battlecries, Spells, etc.

Vaporize will kill the minion even if it is buffed by Divine Shield or other immunity effects.

Additionally, the minion will be vaporized before it has a chance to attack the mage, therefore the mage will not take any damage.

Ice Block: When your hero takes fatal damage, prevent it and become immune to this turn.

When the mage takes damage that would otherwise be lethal, the damage is prevented and the mage will become immune to damage for the remainder of the turn.

This is triggered by any type of damage.

When a secret is played, perform the following actions to help determine which secret was used.  It is helpful to perform these steps in order, but that may not be applicable to your situation.

Use your knowledge of secrets presented in this Hearthstone Mage secrets guide, combined with what opportunities you have available.

First, check to see if Ethereal Arcanist is on the board, if so it is important to eliminate the secret as soon as possible.

If none of the above actions trigger a secret, then the secret has to be Ice Block.

Two of the Hearthstone Mage secrets, Vaporize and Ice Barrier are triggered when an attack is made against the Mage.

The best way to uncover these two secrets is to attempt to set the secret off by attacking the Mage directly.

Attacks made against the mage should use your weakest or most disposable minion.

In order to test for Mirror Entity, play the weakest minion you have available.  Note that Hero powers, such as the Paladin’s will not count as playing a minion and as such will not set off the Secret.

You can also choose to play a minion that would offer the least benefit to your opponent. or be easy for you to quickly remove.

These two secrets can occasionally be tested together if you have a spell that will target a minion.  If you can test in this way, be sure to choose the weakest spell you have.

Always be wary about casting any buffs when it’s possible that the Spellbinder secret is active.

The only way to test for the Ice Block secret is through the process of elimination, or by killing your opponent.

You generally do not want to attempt to kill your opponent if you suspect they have Ice Block because this may waste whatever resources you will need to kill the Mage during the next round.

Note, however, that while Ice Block will prevent lethal damage during the turn, you may have options that can damage the Mage in a way that will limit the amount of health they will survive the turn with.

For example, if the Mage has only 10 health, instead of attacking with a 10 damage spell or minion, try attacking with multiple lower damage minions.

However, if you attack with the 8 damage minion first, this is not lethal to the mage and will not trigger the secret – so your opponent would survive with 2 health.

How to Use Mage Secrets Efficiently

Mage secrets are very situational and you will have to make the best judgment based on the cards you have in your deck and your specific situation.

However, when building your deck – if your strategy is to create a Secret-heavy deck, it’s recommended to include synergistic cards like the Kirin Tor Mage and the Ethereal Arcanist.

Attempt to combine secrets with these cards when it’s possible for you to do so.

The Ethereal Arcanist is guaranteed to be buffed +2/+2 if you can play him while a Secret is active, and this card may even be buffed more if the secret remains up for additional turns.

Ice Barrier is a great secret because it can be played in a variety of situations.  We suggest playing this secret whenever you can cast it efficiently.

For example, if you have 3 mana crystals left at the end of your turn,  then this is a great secret to play because the Armor does not wear off.

It’s impossible to predict what minion your opponent will play in their next turn, so there is a little risk involved in choosing the most opportune time to use Mirror Entity.

Try to learn your opponent’s moves, and play the card where you think they have little choice but to play a minion which would be highly beneficial to you.

If you have two Mirror Entities, you may want to play one early in the game (which could put pressure on your opponent) and then later in the game, when they think you are not likely to have another Mirror Entity.

This is a lot like Mirror Entity. in that it can be extremely useful, but it is difficult to predict the most opportune time to use the secret.

The most ideal situation would be to play the Counterspell secret when you feel like you can predict that your opponent will cast a spell that would be detrimental to them when countered.

Spellbender should be used the same way you would use Counterspell. If you have both secrets available, but if you believe that your opponent will cast a beneficial spell, such as Blessing of Kings, use Spellbender.

Vaporize should be used when your opponent has few choices on what to play next.  Ideally, you want to destroy a valuable minion of your opponents.

If your opponent has a mix of low damage and high damage minions on the board, chances are likely they will test for Vaporize by playing a low damage minion first – so it is best if you can eliminate this choice altogether.

Because Ice Block will only trigger after you receive a lethal amount of damage, it is ideal to use this early in the game as this will remain active throughout the game, and you can make your opponent waste resources early on trying to figure out the secret.

The only time this would not be ideal is when playing against a hunter who may have Flare. which can reveal your secret.

Conclusion: Mage Secrets & How to Counter them

And that’s about all we have for our Hearthstone Mage secrets guide. We hope you found it helpful! If so, let us know your thoughts by leaving a comment or by rating it!

Here are even more Hearthstone content and guides for you to enjoy: