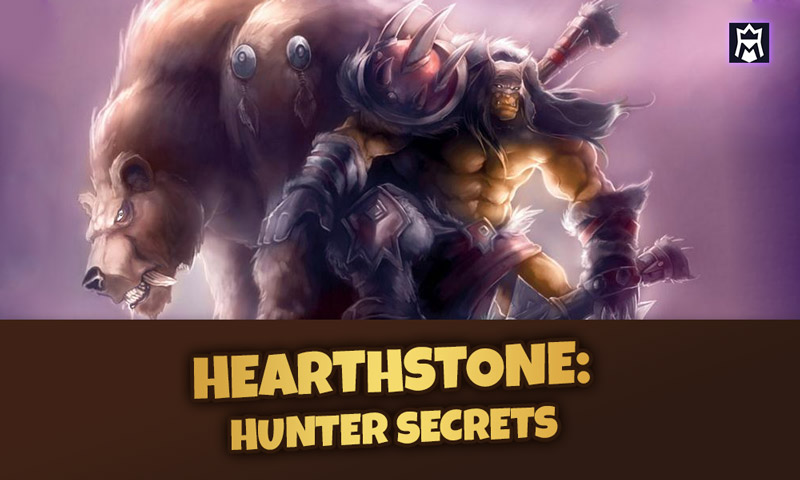 Hunter Hearthstone Secrets: How to detect and counter them

It is important to learn the various ways Hearthstone Hunter secrets can be countered regardless of whether you are playing against a Hunter or as a Hunter.

If you are playing as a Hunter, knowing how your Secrets can be detected and countered may help you strategically use your secrets in a way that is difficult for your opponent to guess.

When playing against a hunter, it is also important to understand the common instances where Hunter Hearthstone secrets are used, and what you can do about them to minimize their effect.

In this article, we will first approach the Hunter secrets as though you are playing against a Hunter who has just used a secret.

The last part of this article discusses ways in which Hunters can use their secrets most efficiently.

What Are Hunter Secrets

Explosive Trap: When your hero is attacked, deal 2 damage to all enemies.

This means that the explosive trap is triggered by attacks from minions as well as weapons but it is not triggered by mechanics such as Battlecries, spells or hero powers.

Freezing Trap: When an enemy minion attacks, return it to its owner’s hand and it costs (2) more.

The effect of the Freezing Trap is triggered regardless of who the target of the minion’s attack is.  Note that the minion is returned before it performs its attack so the damage from the minion never occurs.

If the Hunter has both Explosive Trap and Freezing trap active at the same time, and a minion attacks the Hunter, the Freezing Trap will trigger first.

Snipe: When your opponent plays a minion, deal 4 damage to it.

Note that Snipe will only trigger when your opponent puts a minion into play – so if the minion is summoned (for example the Paladin’s Silver Hand Recruit) Snipe will not trigger.

The damage from Snipe will also happen after the minion’s mechanic Battlecry.

Note that Snipe will also deal damage to minions which are put into play with stealth.

Misdirection: When a character attacks your hero, instead he attacks another random character.

Note that this effect is triggered by attacks only, which means that weapons will also cause Misdirection to trigger but effects such as Battlecries, spells or Hero Powers will not trigger it.

Note that Misdirection will attack another random character.  The only saving grace is the attack cannot be on the Hunter.

Snake Trap: When one of your minions is attacked, summon three 1/1 snakes.

If both Freezing Trap and Snake Trap are active at the same time, the Freezing trap will take priority.

The snakes are held by the 7 minions on the board at one-time rule, so if the Hunter has 6 minions out, then only 1 snake will be summoned.

When a secret is played, perform the following actions to help determine which secret was used.  It is helpful to perform these steps in order, but that may not be applicable to your situation.

Use your knowledge of secrets presented in this guide, combined with what opportunities you have available.

Both of Hunter’s traps (Freezing Trap and Snake Trap) are triggered by attacks against Hunter’s minions.  This is helpful because you can check for both traps at the same time.

It is best to use a cheap minion unimportant to your board control to test for these traps.

When faced with a potential Snake Trap, make sure to keep any AOE effects, such as Consecration, in your hand so it can be used after the effect is triggered.

If the hunter does have Starving Buzzard on the board, silence the Buzzard, or kill it with a spell.

The easiest and quickest way to test Snipe is to play a very cheap and weak minion so you don’t lose much if your minion dies.  The most ideal choice would be a minion with a battlecry or deathrattle so you get some effect from the card before it is removed from the game.

If you do not have a good, cheap card on hand, another option is to play a strong minion that will not be killed by Snipe’s effect.  Minions with Divine Shield also work well against Snipe’s effects.

Both of these traps are only triggered when the Hunter is attacked directly.  This allows you to test for both threats at the same time.

Note that Explosive trap is much more commonly seen than Misdirection, so chances are likely you will see Explosive Trap – but it is good to be prepared for both.

To better minimize the damage caused by Explosive Trap, a good idea is to use any minions that have 2 or less health to kill any opponent’s minions you can.  Then trigger the Explosive Trap with a high-health minion.

This ensures that any low-health minions you had on the board are not entirely wasted as they would have been if Explosive Trap was activated and killed them all.

If the above situation is not possible, another tactic is to buff your existing minions enough to survive Explosive Trap or return the most valuable (if you have a card such as Youthful Brewmaster) on hand before triggering the trap.

For Misdirection, your goal is to attempt to minimize the damage your hero or one of your minions would take.

To help minimize potential damage, never attack the Hunter with a Minion that has a high attack value as this could damage or kill your Hero or one of your minions.

Note that the below scenarios heavily depend on your specific situation, but below are some common ways to use your secrets in the most efficient way possible.

Another good situation for Explosive trap is when playing with someone who has a Murloc deck.

If you have little to no minions in play, and your opponent has many low-health minions such as murlocs.

When using explosive trap, try to keep your side of the board free of minions.  This leaves your opponent with very few options and will be forced to attack you directly and trigger the trap.

Ideally, you want your opponent to trigger the Freezing trap by a powerful and expensive minion, however, things don’t usually work out so well.

This said, the best time to use the Freezing trap is when your opponent has only powerful minions on the board, or when you expect your opponent is lining up an attack with a favored minion, and returning the minion to their hand would result in unfavorable conditions for your opponent.

Snipe is a very situational Hearthstone Hunter secret to suggest use scenarios on as it’s impossible to know what minions your opponent is holding in their hand.

Snipe is generally beneficial, however, even if it is wasted on a low-health minion because your opponent would have had to waste mana and lose a minion.

When you are in control of the game is an excellent opportunity to play Snipe, as your opponent is feeling pressure and is likely to take risks or be forced into making a poor choice, such as playing a stronger minion or a legendary.

Keep in mind that Misdirection will attack another random character, meaning it can easily attack one of your own minions if you are unlucky.  On the plus side, it helps prevent your hero from taking damage.

The best opportunity for Misdirection is when your opponent has a small selection of valuable minions on the board, and your side of the board is clear.

In situations such as this, the use of Misdirection is valuable because it helps you out of a disadvantageous situation.

Before using Snake Trap, you should check to see if you have cards such as the Starving Buzzard or Scavenging Hyena available to play.

Since the snakes summoned from the trap are considered beasts, they interact well with the above minions.

If you play a card such as Starving Buzzard on the same turn as you play your Snake Trap, your opponent is very likely to trigger the trap while the Buzzard is still in play and not affected by anything such as silence.

This ensures you can draw 3 cards as well.

Well, that’s about it for our Hunter Hearthstone secrets guide. We hope that this was helpful to you.

As always let us know in the comments or rate the post below to let us know what you thought of our Hearthstone Hunter secrets article.