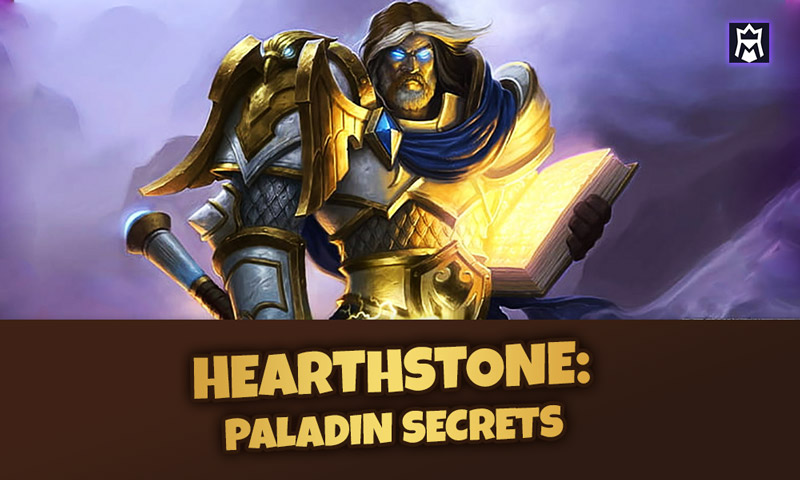 Hearthstone Paladin Secrets: How to counter and detect them

It is important to learn the various ways Hearthstone Paladin secrets can be countered regardless of whether you are playing against a Paladin or as one yourself.

If you are playing as a Paladin in Hearthstone, knowing how your Secrets can be detected and countered may help you strategically use your secrets in a way that is difficult for your opponent to guess.

When playing against a Paladin, it is also important to understand the common instances where Paladin secrets are used, and what you can do about them to minimize their effect.

In this article, we first approach Hearthstone Paladin secrets as though you are playing against a Paladin who has just used a secret.

The last part of this article discusses ways in which Paladins can use their secrets most efficiently.

What Are the Paladin Secrets

Eye for an Eye:  When your Hero takes damage, deal that much damage to the enemy hero.

This secret’s effect is triggered when the Paladin takes damage.  When this occurs the same amount of damage will be dealt to the opponent directly.

Note that any damage will trigger this effect, which means minion attacks, spells, and even battlecries can set off Eye for an Eye.

Note that if played wisely, it is possible for you to kill your opponent with the damaging effects of Eye for an Eye – and the damage is dealt even if it is the Paladin who initiates the attack.

Noble Sacrifice: When an enemy attacks, summon a 2/1 defender as the new target.

Note that Noble Sacrifice can only be triggered by attacks and not spells, Hero Powers, or other effects such as a Battlecry.

Generally, the Defender is summoned with a die, but there are ways to increase the health of the minion by having specific cards in play.  These include the Stormwind Champion and the Sword of Justice.

Redemption:  When one of your minions dies, return it to life with 1 health.

The effects of Redemption are triggered when any minion belonging to the Paladin dies.  The Secret returns that minion to the board, with 1 point of health.  This effect will be triggered regardless of what kills the minion.

Also note that effects that may have changed the minion’s damage or abilities during the game, such as silence or a buff will not be applied when the minion comes back to life.

Repentance: When your opponent plays a minion, reduce its Health to 1

Note that the health change will occur even in instances where the minion is protected by Divine Shield or is in Stealth.

When a secret is played, perform the following actions to help determine which secret was used.  It is helpful to perform these steps in order, but that may not be applicable to your situation.  Use your knowledge of secrets presented in this guide, combined with what opportunities you have available.

Eye for an Eye

Note that by testing Eye for an Eye, you will also be testing Noble Sacrifice.  It is best to test for both using the method below:

To check to see if the Paladin secret – an Eye for an Eye is active, you will need to trigger this by dealing damage to the Paladin himself.

The mechanics of Eye for an Eye deal damage to your Hero directly, to mitigate this damage you want to use a very weak spell or minion.

If the Secret is Noble Sacrifice, you have just uncovered the secret without potentially wasting a lot of damage.

It is possible to completely mitigate the effect of Repentance if you have the right cards available.  Since Repentance reduces the minion’s health to 1,  playing a minion with 1 health will nullify the effects of Repentance and make it a wasted secret.

Since Redemption returns a Paladin’s minion to life with 1 health.  Because the damage will remain the same, it is important to make sure you attack a weak minion if you have the opportunity.

Note that if the Paladin has a silenced character, and you choose this character to attack and kill, the character will be brought back without the effects of silence, so choose based on what characters are the most threat to you and the least likely to be a threat if returned.

Best Times to Use Paladin Secrets

Eye for an Eye

Always take your Hero’s health into account when considering the methods below:

The best time to use Eye for an Eye is during the later stages of the game.  Generally, these later stages open up opportunities for your opponent to deal high damage attacks.

An alternate option for the use of Eye for an Eye is when your opponent is low on health, and the damage which would be reflected back at them would cause them to die.

You should try to use Eye for an Eye when your opponent has few options available to them.  If they only have the option of high damage attacks, this will cause the most damage to them.

Note that the damaging effects of Eye for an Eye will occur even if you are the one who initiates the attack.  You would need a weapon available, such as Truesilver Champion.

If your opponent’s health is low, and they have a high damage minion in play (which won’t kill you) you can attack the minion and deal that same damage to your opponent.

Noble Sacrifice is most useful when you can use it to prevent a strong attack.  This secret is better used late in the game when your opponent has a higher chance of having strong minions on the board.

Repentance’s effect is most useful when it allows you to trigger its effect on an enemy minion with high health.  As such, it is best to use this secret later in the game because it will increase the likelihood that a stronger health minion will be played.

This will cause your opponent to waste resources (mana and potentially their own minions) to kill a minion of yours which will just be brought back to life.

This leaves the other option for your opponent to ignore the minion, and puts you in an opportunity where you can repeatedly damage your opponent.

Conclusion: Paladin Secrets & How to Counter them

That’s about all we have for our Hearthstone Paladin secrets guide. We hope that you found it helpful and if so let us know your thoughts in the comments or by rating this post below!