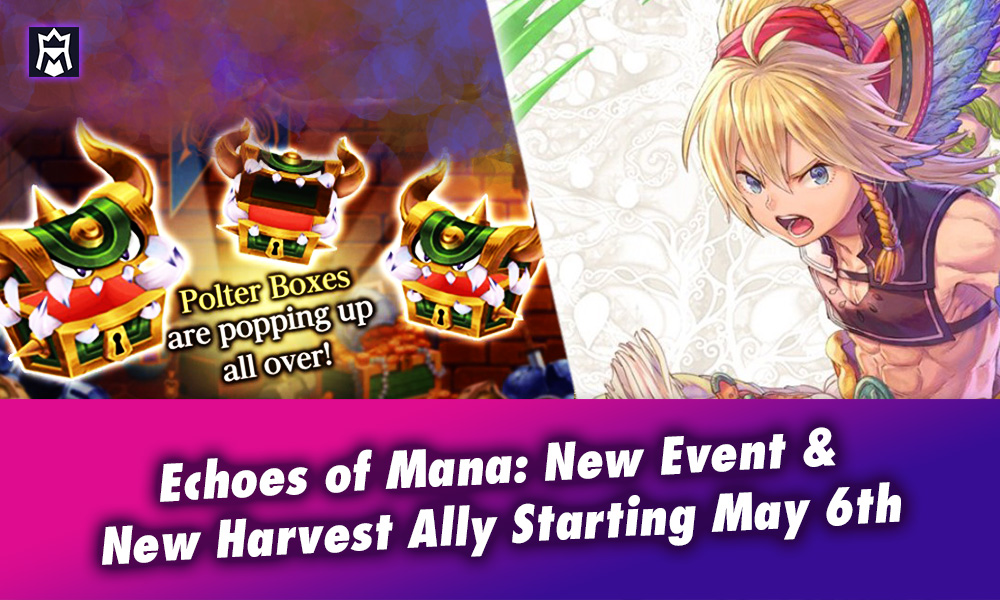 A new event has just started in Echoes of Mana on May 6th at 6:00 UTC, alongside it, the developers have also released a new harvest ally, a memory gem, and more.

This is only the 2nd event since the launch of the game back in April if we don’t count their 1 Million Downloads milestone Celebration bonus rewards.

The world is now randomly filled with Polter Boxes that you will have to smash through in order to find a lot of ascending material and experience tomes.

There are also a couple of limited-time-only co-op quests that are tied to the event.

Each event quest that you finish will give you event points (also known as EP) that you can then trade for exclusive items and rewards at the Coffer Chaos EP Trader.

There’s also an event boss that you can try to defeat to receive some nice rewards.

So make sure you hurry up with your friends and start clearing these as soon as possible as awakening orbs in Echoes of Mana are a bit of a big deal.

With the addition of the new event, Square Enix (publishers of the game) has also released a new Harvest character that is now available.

The new ally added to the game is called Keldric – Guided by the Great Tree and is a 4★ harvest hero. We also get a new 4★ memory gem “Aim for Wind Acorns”.

Also, if you opt for the x10 pull, you’re not only saving 300 crystals but you’re also guaranteed to get a 3★ or higher memory gem or character on your 10th pull of a 10-harvest summon.

What is Echoes of Mana?

Echoes of Mana is a new gacha action RPG that was developed and published by the very popular gaming studio Square Enix. The story is based on the other successful Mana series games.

Basically, you play as Quilto and you’re mission is to adventure through all the Mana universe world sets and gather memories through…erm you’ve guessed it: echoes of mana (hence the name of the game).

Of course, since this is also a gacha game, you will have the option of summoning a bunch of cute and powerful friends to help you along the way by forming a team with the best characters in the game to help you defeat all your enemies.

Speaking of, you can also check out our official Echoes of Mana tier list, to see which are the best characters in-game for the latest meta. Ideally, you’d want to create a team with only the highest ranked ones from our list.

Related: How to Farm Lucre In Echoes of Mana

You can also read the latest Gaming News and take a look at our popular tier lists for games. While you’re at it, you can like us on Facebook and follow us on Twitter. We appreciate it!