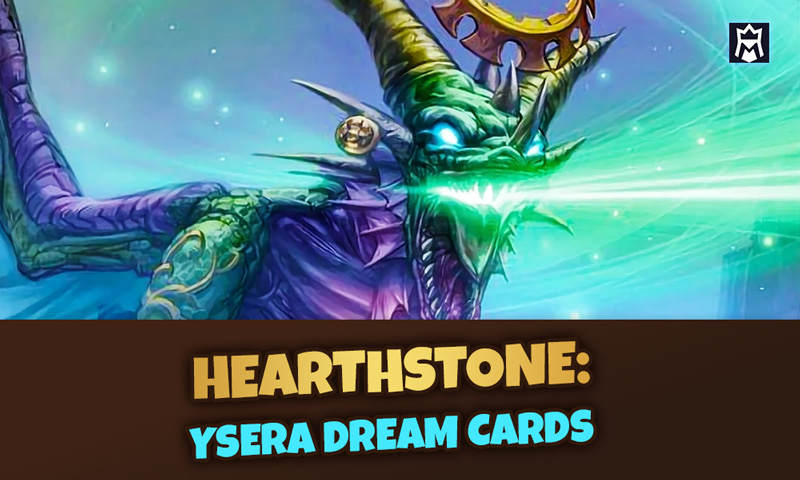 The Legendary Hearthstone card, Ysera, comes with the ability to draw a Dream Card at the end of your turn. Continue reading to discover Ysera Dream Cards list.

What are Dream Cards?  These are special cards that you cannot access unless you have Ysera on the board.

Ysera is one of the higher-cost legendary cards that can be considered worthwhile.

Not only is Ysera a powerful minion in her own right, but the cards provided through having her in play are also strong cards for the mana cost.  Two of the dream cards even have a zero mana cost.

As of writing this, there are 5 dream cards in total – but we will continue to update this article as more cards, and information about the cards are discovered.

The Dream Cards consist of the following:

Dream is a versatile spell that you can use to either buff your own minions or debuff those of your opponent.

You can use Dream to remove an enemy blocker from the board or return one of your minions so that you can play its Battlecry effect again.

Another awesome thing you can do with Ysera’s Dream card is that it can return your Ysera, who has probably taken a lot of damage by this point in the game, back to your hand so that you can replay it and give it another chance at staying alive.

Emerald Drake’s stats are impressive at first glance, but when you consider its role in a deck and how many other Dragon-related cards you are using, it becomes even more powerful.

Most players that are using Ysera are pretty much running a control deck (check out Hearthstone Deck Archetypes), so that means that you aren’t really using too many dragon minions on your board.

By using an Emerald Drake you will get a ton of synergy with Ysera and other dragon cards.

This is the perfect way to capitalize on the fact that you aren’t using many dragon cards in your deck.

The damage output that this card can have is pretty insane, but it only works if you are playing a control deck.

If you are using a more aggressive strategy then this card will not be as effective because it doesn’t really do anything to help your win condition.

Laughing Sister costs only 3 Mana, but it’s usually one of the Ysera cards you don’t want to use. It has no Dragon synergy and its small body is not intimidating enough to cause any real concern for your opponent’s board.

The only time that this card is really effective is when you’re playing against another Ysera deck and need to stall your opponent. If they have no way of removing the minion then it can be useful, but this scenario is rare.

First of all, you should keep in mind that Nightmare can target minions, regardless of whose side they’re on. This card is a very situational one, and you shouldn’t play it unless you have an immediate use for it.

If your opponent has a big minion on board, this is the best way to deal with it, as you can buff one of your very own minions to inflict more damage.

The only problem is that your opponent might be able to use their Hero Power, or even play another powerful minion in response.

Ysera Awakens is a very powerful card to have in your hand, and it’s pretty much one of the most desired of all the Ysera Dream cards.

The ability to clear your opponent’s board while keeping your Ysera safe can be a great asset, especially when playing Control decks.

You should know that Ysera Awakens damages not only your opponent’s health but also your own, still, it’s totally worth it, as this is quite an impressive remove card.

Ysera is a popular card in Control decks, and all of the cards that we have talked about above will fit right in, with the exception of Laughing Sister.

Keep in mind that if Ysera spends many turns in play, you will generate so much value over time that it is likely to become insurmountable.

You can use Ysera Awakens and Nightmare to inflict damage directly, or Emerald Drake if you wish to destroy enemy minions. You should also check the board for lethal if your Ysera has been on it for several turns.

If you want to play Ysera, the best way to do it is in a deck that can keep her alive and well. You can also use her as an extra powerful card in your deck if you have no other options.

The dream cards we have talked about above are all useful in their own right, but they are not as effective as Ysera herself.