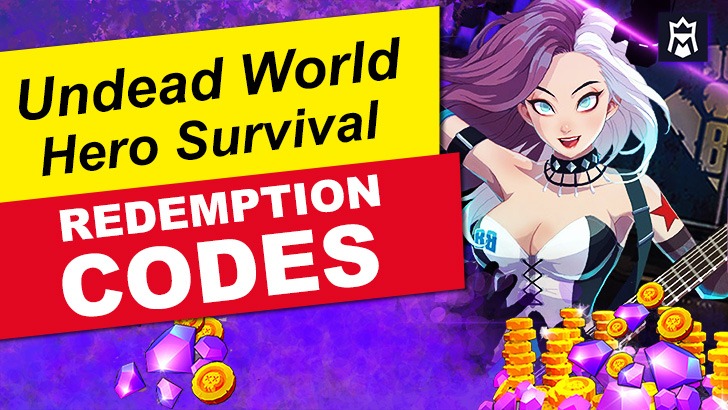 Are you looking for some free Undead World codes to redeem and receive some nice rewards in-game? Well, look no further, because on this page you’ll find exactly that. Fresh and working Undead World redemption codes for 2022 that you can use right away.

You will also find instructions on how to redeem Undead World codes below.

These are fresh and working Undead World: Hero Survival codes that you can use right now to get rewards in-game:

How to Redeem Undead World Codes

Here are 5 simple steps on how you can redeem Undead World: Hero Survival codes:

1. First you should launch Undead World
2. When you’re in-game go to settings (tap on your avatar)
3. On the settings page you will have a text saying COUPONS and a button REDEEM
4. Click on the REDEEM button
5. Copy and paste any of the codes found on this page and receive your rewards

That’s really all you have to do. Of course, keep in mind that not all of these codes would work all the time. Most of these codes have an expiration date, so if you don’t get any rewards it’s probably because the coupon has expired (or you have copied it wrong).

We try to publish the newest and working Undead World codes at the top of the table, so that way you know which ones are the freshest to try them first to get rewards.

How To Get More Redemption Codes

The company that develops and publishes the game, DoubleDown Interactive is pretty active on all the social media pages and they regularly host events and post fresh codes and exclusive rewards for the players that follow Undead World online. Here’s an example:

We’re back online and fully updated!

*reward must be claimed within 72 hours. pic.twitter.com/POYDpbwJJU

Well, you’ve reached the bottom of this article, congrats. Hopefully, some of the Undead World codes that you have found on this page are still currently working for you.

We try to publish new ones as soon as they come up. But also, if you know about some extra Undead World: Hero Survival redemption codes, please feel free to share with us and the community by leaving a comment down below, and we’ll add it to the main list of working codes.

Undead World: Hero Survival is a new idle adventure RPG and mobile game that uses a gacha system to summon new heroes to aid you in the battle against the zombie hordes. It was developed and published by DoubleDown Interactive and it can be downloaded and played for free both on Google Play and the App Store.

Also make sure to check out our: Undead World Tier List 2022